During my recent series on “Why Most Published Research Findings Are False“, we talked a lot about bias and how it effects research. One of the classic ways of overcoming bias in research is either to 1) do a very large well publicized study that definitively addresses the question or 2) pull together all of the smaller studies that have been done and analyze their collective results. Option #2 is what is referred to as a meta-analysis, because we are basically analyzing a whole bunch of analyses.

Now those of you who are paying attention may wonder how effective that whole meta-analysis thing is. If there’s some sort of bias in either what gets published or all of the studies being done, wouldn’t a study of the studies show the same bias?

Well, yeah, it most certainly would. That’s why there’s a kind of cool visual tool available to people conducting these studies to take a quick look at the potential for bias. It’s called a funnel plot, and it looks exactly as you would expect it to: 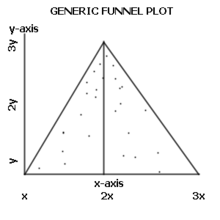 Basically you take every study you can find about a topic, and you map the effect size noted on the x-axis, and the size of the study on the y-axis.  With random variation, the studies should look like a funnel: studies with small numbers of people/data points will vary a lot more than larger studies, and both will converge on the true effect size. This technique has been used since the 80s, but was popularized by the excitingly titled paper “Bias in Meta-Analysis Can Be Detected by a Simple Graphical Test”.  This paper pointed out that if you gather all studies together and don’t get a funnel shape, you may be looking at some bias. This bias doesn’t have to be on the part of the researchers by the way….publication bias would cause part of the funnel to go missing as well.

The principle behind all this is pretty simple: if what we’re looking at is a true effect size, our experiments will swing a bit around the middle. To use the coin toss analogy, a fairly weighted coin tossed 10 times will sometimes come up 3 heads, 7 tails or vice versa, but if you toss it 100 times it will probably be much closer to 50-50. The increased sample size increases the accuracy, but everything should be centered around the same number….the “true” effect size.

To give an interesting real life example, take the gender wage gap. Now most people know (or should know) that the commonly quoted “women earn 77 cents on the dollar” stat is misleading. The best discussion of this I’ve seen is Megan McArdle’s article here, and in it an interesting fact emerges: even controlling for everything possible, no study has found that women outearn men.  Even the American Enterprise Institute and the Manhattan Institute both put the gap at 94 to 97 cents on the dollar for women. At one point in the AEI article, they opine that such a small gap “may not be significant at all”, but that’s not entirely true. The fact that no one seems to find a small gap going the other direction actually suggests the gap may be real. In other words, if the true gap was zero, at least half of the studies should show women out earning men. If the mid-line is zero, we only have half the funnel. Now this doesn’t tell us what the right number is or why it’s there, but it is a pretty good indication that the gap is something other than zero. Please note: The McArdle article is from 2014, so if there’s new data that shows women out earn men in a study that controls for hours worked and education level, send it my way.

Anyway, the funnel plot is not without it’s problems. Unfortunately there’s not a lot of standards around how to use it, and changing the scale of the axis can make it look more or less convincing than it really should be. Additionally, if the number of studies is small, it is not as accurate. Finally, it should be noted that missing part of the funnel is not definitive proof that publication or other bias exists. It could be that those compiling the meta-analysis had a hard time finding all the studies done, or even that the effect size varies based on methodology.

Even with those problems, it’s an interesting tool to at least be aware of, as it is fairly frequently used and is not terribly hard to understand once you know what it is. You’re welcome.

One thought on “Fun With Funnel Plots”