From time to time, I see this graph pop up on Twitter:

It’s from this blog post here, and it is almost always used as an example of how picky women are. The original numbers came from a (since deleted) OK Cupid blog post here. From what I can tell they deleted it because the whole “women find 80% of men below average” thing was really upsetting people.

Serious question though….has this finding been replicated in studies where men and women don’t get to pick their own photos?

As anyone who’s looked at Facebook for any length of time knows, photo quality can vary dramatically. For people we know, this is a small thing…”oh so and so looks great in that picture”, “oh poor girl looks horrible in that one”, etc etc. One only needs to walk in to a drug store to note that women in particular have a myriad of ways to alter their appearance….make up, hair products, hair styles, and I’m sure there are other things I am forgetting. Your average young male might use some hair product, but rarely alters anything beyond that.

So basically, women have a variety of ways to improve their own appearance, whereas men have very few. Women are also more rewarded for having a good looking photo on a dating site. From the (deleted) OK Cupid article:

So the most attractive male gets 10x the number of messages as the least attractive male, but the most attractive woman gets 25x the number of messages. A woman of moderate attractiveness has a huge incentive to get the best possible photo of herself up on the site, whereas a similarly placed man doesn’t have the same push. Back when I made a brief foray in to dating sites, I noted that certain photos could cause the number of messages in my inbox to triple overnight. With that kind of feedback loop, I think almost every woman would trend toward optimizing their photo pretty quickly. Feedback would be rather key here too, as research suggests we are actually pretty terrible at figuring out what a good photo of ourselves actually looks like.

Side note: as we went over in a previous post, measuring first messages puts guys at a disadvantage from the get go. Men as a group receive far fewer messages from women on these sites. This means their feedback loop is going to be much more subtle than women’s, making it harder for them to figure out what to change.

My point is, I’m not sure we should take this data seriously until we compare it to what happens when all the pictures used are taken under the same conditions. The idea that the genders select their photos differently is a possible confounder.

I did some quick Googling to see if I could find a similar distribution of attractiveness rankings for a general research study, and I did find this one from a Less Wrong post about a study on speed dating: 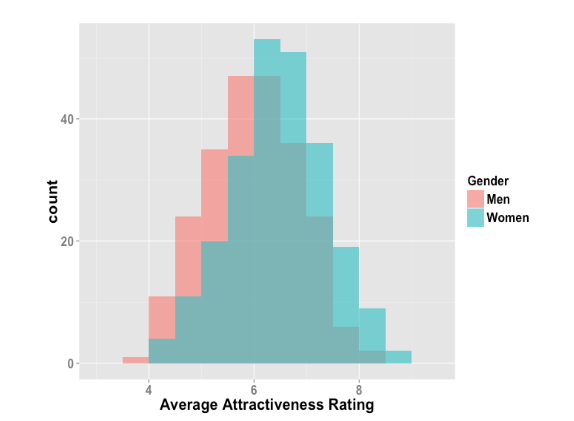 They note that men did rate the average woman slightly higher (6.5) than women rated the average man (5.9), but note that we see a bell curve rating in both cases. The standard deviation was noted to be the same (0.5). At a minimum, I feel this suggests that online perceptions do not translate cleanly in to real life. I suspect that’s a statement that can be applied to many fields.

I’d be interested to see any other non-dating site data sets people know about, to see what distribution they follow.