But not right up front, that would put me in mommy blog territory.

Last week’s post about breastfeeding reminded me that I had mentioned back in August a few things about baby growth charts, and how some odd numbers had actually been part of a series of events that led to me having an urgent c-section.  I figured since I’d brought it up, I should update you all.
The little lord is growing just fine.  He’s actually quite the textbook little baby….literally.  If I read any book that says “around week 16 this will happen” he’s there +/- 3 days.  If it says he’ll want to eat every 3 hours, he’s there to the minute (he did this 7 times in a row once, to the minute).  If you wanted to write a textbook about a baby, you could come watch my son.  I’ve come to realize predictability is an amazing quality in a baby.
As of his last checkup he was 40th percentile for height and 30th for weight.
Interestingly, the biggest reaction I get when I tell people that he’s 30th for weight is “how much more is he supposed to weigh?  He looks fine to me!”.
I think this is another interesting misunderstanding of the height/weight charts.  Average is not necessarily the same thing as normal.  Normal can be a broad spectrum, average is just one number.  My baby is normal, thankyouverymuch.

All right, now that you’ve sat through all that metric system, here’s the baby picture I promised (and yes, he’s labeled in this picture….5 months old): 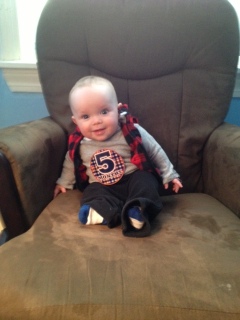 I told you he was cute.