Last week reader panjoomby pointed me to an interesting study that correlated a countries sugar consumption to their rates of major depression.  Apparently that gives a correlation of .948.

Any time there’s a correlation that high, I’m going to get a look on my face that’s an interesting cross between curious and suspicious and that causes me to get wrinkles between my eyebrows.  I decided to take a look around for the full study, and found a copy here.  Basically the authors took data from the Food and Agricultural Organization  and correlated them with the results from a 1996 paper by Weissman et al published in JAMA called Cross-national epidemiology of major depression and bipolar disorder.

I couldn’t find a full free version of the mental health study, but I did find this update by the original author where she described what the study did (they surveyed people in the various countries for symptoms matching those for major depression, DSM III version)

A few things struck me about this study and it’s near-perfect correlation (shown below): 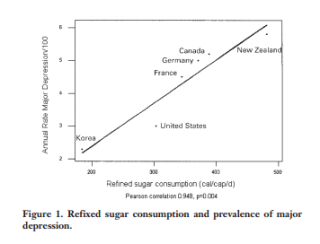 None of this should imply that I’m a big fan of sugar.  I’m not.  I don’t tolerate it well.  If you’d like to see an example of what I look like when I eat it, please see below: