On Tuesday I griped about a woman at a conference complaining that there were no jobs because she didn’t have one.  I was not so much annoyed with here assertion – that STEM (science, technology, engineering and math) jobs are not as plentiful as everyone would have you believe – but more with her complete conviction that data was irrelevant because it didn’t match her experience.

I still think she was being ridiculous in her phrasing, but I saw an article today that reminded me that she may not have been ridiculous in her claim.  Apparently a report was just released stating that our country is producing more than enough STEM graduates, and in fact many of these graduates are not finding jobs.  This is in response to the lobbying around making more H1-B visas available to bring more foreign workers to fill jobs caused by a lack of qualified domestic workers.  Critics argue that there is no lack, but that H1-B visa holders are paid less, so companies want more of them.
Now I’m not sure what to make of all this.  I work in healthcare, which is excluded from pure STEM by most definitions, even though I love me some stats.  Regardless, I don’t really know much about employment in IT, etc to know if this is true or not.
I was however, quite fascinated to look at the report that was put out and note a few things:
On the other side though, I get somewhat skeptical of companies saying “there’s no one for these jobs!”  I’d like a better definition there…do you mean actually no one qualified?  Or no one qualified at the price you’re willing to pay for them?  I’ve worked in more than one workplace where I’ve seen managers get frustrated when they’re told they can’t get everything they want for the salary they’re offering (and potentially then post the job anyway).  Many employers these days seem to be suffering from the same issues as those doing online dating have…when someone gives you thousands of options, why shouldn’t you hold out for absolutely perfect?  That thought actually came up at the talk that I started this post with, and the recruiter said she’d actually had to sit down with execs and tell them they were being too picky…that 90% right for the job was good enough (and she was a recruiter who worked strictly with scientists).
Anyway, economic data like this always makes me a little crazy.  Too many things going in too many directions.  Like herding cats. 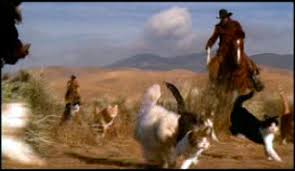 Sigh.  Stay sane out there.

One thought on “Jobs for STEM grads, are there enough?”