“Why does moving suck?”

-two of my cousins, while cleaning out their childhood home in 90 degree heat

Ugh, moving. Yeah, that definitely sucks. Get back to packing.

Okay, seriously. You need to pack.

So the thing about moving, is that it sucks.  It’s bad for several notable reasons, on which I am more than happy to expound:

1. Time spent packing and moving is like some sort of horrible geometric progression that theoretically approaches finished but feels like it’s never going to get there.

So a pretty typical geometric progression looks like this:

The stuff of dreams or nightmares, depending on your perspective

Which could translate in to percent of move completed, like this:

Behold the angst of the x-axis

Now if you take that first series, there’s a somewhat fundamental mathematical rule that tells us this will eventually happen:

The “…” literally means “and we go on like this FOR EV ER.

Nice equation, but you know what it’s telling us about getting to that perfect ending?  YOU NEED AN INFINITE NUMBER OF TERMS BEFORE YOU GET THERE.  To me, this means that no matter how beautiful the picture in your head of how organized you’ll be or how nicely you’re going to leave everything looking, you’ll eventually have to start calling .9875 close enough and just start shoving things in trash bags and labeling them with Band-aids and sharpies.1

2. Moving is all the household chores at one time.

Household chores are a pretty highly researched area, especially when it comes to how fairly we divide them up.  The lousy thing about moving is that it turns your life in to one big several day long whirl of all the household chores, and none of it feels fair.  You have to clean and organize and sort and probably do laundry.  Then you have to do it all over again when you get where you’re going. Ugh.

Household chores just don’t bring happiness.  Neither does moving, at least for women2.

3. Moving is probably just another term in a bigger equation of lousy things.

One of the interesting things about looking in to the research on moving is that the process itself is most commonly studied when it’s attached to other things like divorce, childhood, aging, etc.  For example, the Holmes and Rahe stress scale3
assigns a general sort of “stress number” to all sorts of different life events. The value assigned for “changing residence” is fairly small (20), but if you look at that list, it’s really uncommon to change residences without ticking at least a few of the other boxes.

For example, the last time I moved, I was pregnant (40) and not unrelatedly, we got a new family member shortly thereafter (39).  We also took on a mortgage (31) and changed our living conditions (25).  The magic number for Holmes and Rahe (in terms of predicting stress related health events) is 150….and in 2 months our household racked up a 155.  That’s enough to put both my husband and I at an elevated risk for a serious health breakdown over the next two years.  Now let’s look at my last 3 moves: 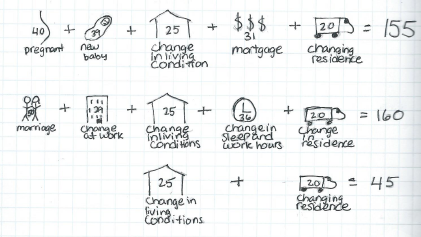 I wanted to add “in law trouble” for 29 to that last one, but I actually really like my in laws and had fun living with them. Take that Holmes-Rahe!

So two out of the three of them actually got me above the 150 level in a very short period of time.  When you consider that the Holmes/Rahe scale is actually supposed to cover the last year of your life, you can see why a move can  impact your whole year pretty quickly.  Additionally, keep in mind that neither of my “bad” moves were really that uncommon.  Changes in family status (marriage, babies, divorce, etc) and just wanting or needing more space/better neighborhood/to own a home are far and away the most common types of moves.  In fact, if you look at the Census Bureau list of the most common reasons for moving, it reads like….well, like the Holmes and Rahe stress scale.  People move when things change and changes are stressful.  People then associate moving with stress, and we all come to the accurate conclusion that it sucks.

Put another way, it’s not so much that moving sucks, is just that it’s a seemingly endless series of chores and housework that is almost always associated with a level of stress that is so bad it can make you sick.

Glad I could clear that up.

1. This is definitely a thing I have done.↩
2. To be fair, most of the moves studied in that study were family moves, possibly initiated by the man changing jobs. This can skew things a bit. Whatever. I hate moving.↩
3. The Wikipedia page also has an example of a version for non-adults, defined as anyone who doesn’t feel like the first list understands their problems well enough.↩

2 thoughts on “No One Asked Me: Moving Sucks”