Well it’s summer and we’ve had one heck of a heat wave up here, with humidity that I heard dubbed “sweatpants heat”. It’s gross. I’m particularly miserable about the whole thing because I’ve caught a terrible cold, which does not play well with the heat/humidity. I was thinking about the unique pain that summer colds bring, and decided to Google around to see if there was any research on this. Turns out there is! It appears that summer colds are actually caused by different viruses than winter colds, so the feeling that they’re a little different is a real one.

In other important news, this website went through and used the water displacement method to figure out the air to chip ratio for most common brands of chips. The results are oddly fascinating: 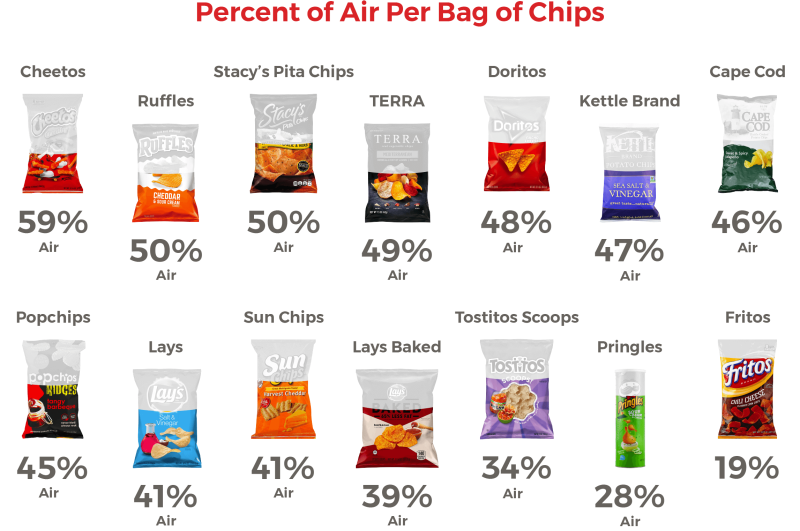 The Assistant Village Idiot did an interesting post about media bias, in the form of compiling Time and Newsweek covers of Presidents from Ford on. A quick look gives you a feel of how each President was portrayed. I previously might have argued that magazine covers didn’t effect me that much, but ever since I found out that I thought Billy Graham died years before he did (probably) because of a TV Guide cover I’ve been less confident about this. Donna B raises a good question in the comments about the covers given to those who ran for the presidency but lost during those years.

Some surprisingly bad news: a huge randomized control trial of state sponsored pre-K shows the positive effect is only present at the end of the pre-K year, and turns negative by 3rd grade with kids who went to free pre-K performing worse in math and science than their peers who stayed home. This is surprising as I thought the worst case scenario would be “no effect”. The study authors have two theories for the results. First, it’s possible some kids just do better at home. Second and not unrelated, they note that more of the kids in the pre-K program ended up in special needs classes (remember, they were randomly assigned to pre-K vs home) and they wonder if some slower to develop kids got inappropriately tagged as special needs. It appears this early designation then followed them and they may have eventually held back beyond what was needed. Still a good data point in the “not everything that sounds like a good idea is one” train of thought.

I’ve been thinking a lot about viruses and other various pathogens recently, and the theories that they impact chronic disease more than we realize at the moment. For example, a recent Harvard study suggests that the herpes virus may help precipitate Alzheimer’s Disease. Celiac disease may be triggered by a candida infection. Some strains of intestinal bacteria may make it really hard for people to lose weight. The mechanisms for this are interesting and varied. The Alzheimer’s theory hinges on the idea that amyloid-B (the thing that ends up clogging up the neurons in Alzheimers patients) is produced to try to fight off HHV-6 and HSV-1, but something gets out of control and it takes over. Candida and gluten apparently bind to the same site on the walls of the intestines, so the theory is the body starts trying to fight off candida but produces antibodies to everything binding at that site. Gut bacteria that thrives on sugar or other “bad” treats might release toxins when you stop eating it that make you feel miserable until you resume previous eating patterns.  One statement I read somewhere while reading this stuff stuck with me “maybe our pathogens didn’t go away when we invented antibiotics and vaccines, maybe they just got less deadly and more subtle”. I’m completely fascinated by these theories, though we’ll see if they pan out.