I saw an interesting headline today: “Broadcasters Worry about ‘Zero TV’ homes”.  At first, this confused me…why was “Zero TV” in quotes?  Is this some new grammar issue I’m not aware of?

So despite my better judgement, I decided to read the article.  I discovered that “Zero TV” does not, in fact, mean a house with zero TVs.  Apparently it’s a marketing category for people who don’t pay for cable, satellite TV, or a digital antenna.  Thus, they can own a TV, but must use it in a “non-traditional” way…like for watching movies on DVD or streaming online or something.

I was pretty disappointed by that definition.  I mean, when I think of using a TV in a non-traditional way, I think of things like this: 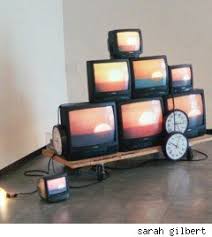 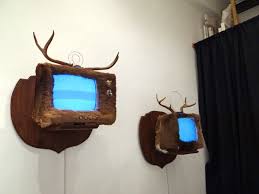 But using a TV for watching movies or shows that you’re downloading or streaming as opposed to buying cable?  That’s hardly avant garde.

Also, anyone with a TV, should not be called “zero TV”.  That’s just annoying.

I was, however, happy to find out that the Nielsen Company apparently has a “Senior Vice President of Insights”.  That manages to sound both pretentious and like something out of a cartoon all at the same time.

2 thoughts on “Kill your television”