Our dryer died this week. Or rather, it died last weekend and we got a new one this week. When we realized it was dead (with a full load of wet clothes in it, naturally), the decision making process was pretty simple.

We’re only the third owners of our (early 1950s) house, and the previous owners spent most of the 5 years they had it trying to flip it for a quick buck. We’ve owned it for 6 years now, so any appliance that wasn’t new when we moved in was probably put in by them when they moved in. That made the dryer about 11 years old, and it was a cheap model. I was pretty sure a cheap dryer over a decade old (that had been slowly increasing in drying time for a year or so, unhelped by a thorough cleaning) would be more trouble to repair than it was worth, so we got a new one.

After making the assertion above, I got a little curious if there was any research backing up the life span of various appliances. As long as I can remember I’ve been fairly fascinated by dead or malfunctioning appliances, which I blame on my Yankee heritage. I’ve lived with a lot of half-functioning appliances in my lifetime, so I’ve always been interested in what appliance sounds/malfunctions mean “this is an appliance that will last three more years if you just never use that setting and jerry-rig (yes that’s a phrase) a way to turn it off/on” and which sounds mean “this thing is about to burst in to flames, get a new one”.

It turns out there actually is research on the topic, summarized here, and that there’s a full publication on the topic here: 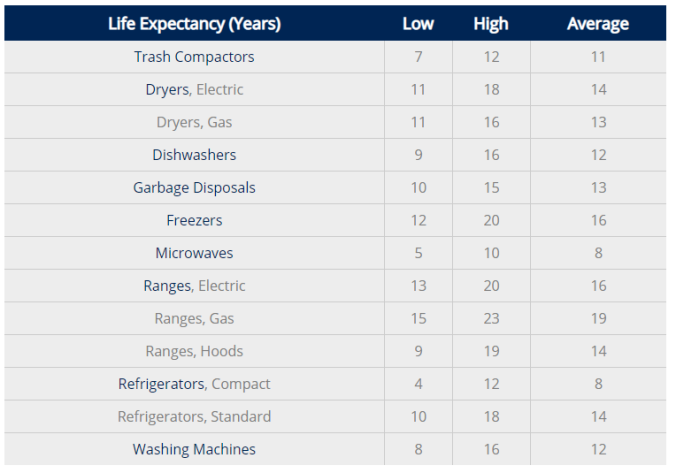 So basically it looks like we were on schedule for a cheap dryer to go. Our washing machine was still working, but it was cheaper if we replaced them both at the same time.

This list suggests our dishwasher was weak as it went at about 7 years (they refused to repair it for under the cost of replacement), but our microwave is remarkably strong (10 years and counting). We had to replace our refrigerator earlier than should have been necessary (that was probably the fault of a power surge), but our oven should have a few more years left.

Interestingly, when I mentioned this issue to my brother this weekend, he asked me if I realized what the longest lasting appliance in our family history was. He stumped me until he told me the location….a cabin owned by our extended family. The refrigerator in it has been operational since my mother was a child, and I’m fairly sure it’s this model of Westinghouse that was built in the 1950s, making it rather close to 70 years old:

It’s amusing that it’s advertised as “frost free”, as my strongest childhood memories of this refrigerator were having to unplug it at the end of the summer season and then put towels all around it until all the ice that had built up in it melted. We’d take chunks out to try to hurry the process along.

Interestingly, the woman in the ad up there was Betty Furness, who ended up with a rather fascinating career that included working for Lyndon Johnson. She was known for her consumer advocacy work, which may be why the products she advertised lasted so darn long, or at least longer than my dryer.

14 thoughts on “Death Comes for the Appliance”