I’m out of town this weekend indulging in a very non-stats related hobby: pro wrestling.

Those of you who follow such things will know that this is WrestleMania weekend and it’s in New Jersey/just outside of NYC this year, and just so happens to coincide with my husbands birthday. Convenient.

Given the throngs of wrestling fans converging on one spot, there were quite a few other shows put on by other groups looking to capitalize on the crowds. One such show was a New Japan pro wrestling/Ring of Honor joint venture held last night at Madison Square Garden.

We went to this one, and I was interested to note it had one of the more lopsided gender ratios of any event I’ve been to. I’ve mentioned previously that I have a habit of counting such things, and last night was no exception. Normally I like to estimate the ratio of mono-gender groups, but despite all my looking I never found a women only group at this event.

I ended up switching to the number of women I could see in each row – rows were about 15 to 20 seats each. Rows almost always had 2 to 3 women in them. I never found a row with 4 women. I’d estimate the ratio at 7 to 1 male to female.

Obviously those first two bullet points emphasize that this is a male dominated fandom, which I’m sure is not surprising to anyone. This was not a show aimed at the more popular or mainstream fan, but the “willing to tolerate half the show being announced in Japanese” type fan.

Tonight I expect the gender ratio to be more even, as WrestleMania has a broader spectrum of appeal and their women’s division is currently on FIRE. I’ll report back with my estimate tomorrow. Go Becky Lynch! 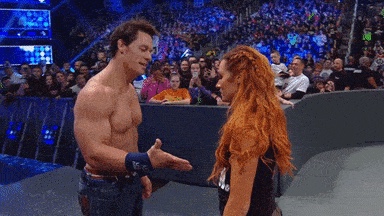 Update: The gender ratio at Wrestlemania ended up being about 4 or 5 to 1 male:female. Interestingly, the “extra” women were almost entirely younger girls, mostly there with their dad. One ahead of us walking in was even fully in costume (as Bailey), carrying a replica title belt and started trying to lead the “Woooooooooooo” cheer on the escalator. I think the strategy of pumping up their women’s division is paying off.