Not too long ago, there was a bit of buzz going on about a study that suggested that liberals and conservatives can both be simple minded. In the past most of the reporting has suggested that when it comes to politics conservatives as a group are less complex thinkers than liberals, so naturally it created a stir. The buzz and the study intrigued me, so I decided to do a bit of a deep dive and sketchnote out what the researchers did.

I got the original study “Are Conservatives Really More Simple-Minded than Liberals? The Domain Specificity of Complex Thinking” by Conway, et al. , and started to read.  One really important note up front: neither I nor the authors suggest that complex thinking is always a sign of correct thinking or even desirable thinking. If you were out with a new acquaintance who told you their views on, say, cannibalism, were complex, you would probably be squicked out. However, since previous research had suggested that conservatives were almost always less complex than liberals, the authors wanted to check that specifically.  Their basic hypothesis was simple: when it comes to complex thinking, topic matters. They conducted 4 studies to test this hypothesis, so the whole thing got a little crowded….but here’s the overview: 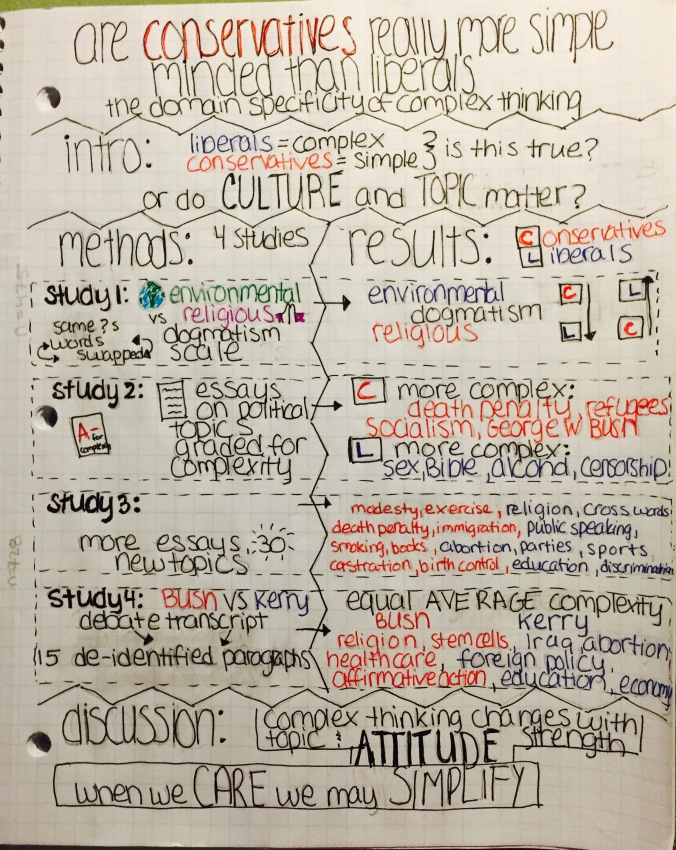 Overall, I don’t think this result is particularly surprising. It makes sense that people are not entirely complex or entirely simple. Interesting study, and I look forward to more!

One thought on “Are Conservatives Simple Minded?”