I recently finished a book called Deep Survival, and I haven’t stopped thinking about it since. If you haven’t heard of it before, it’s an examination of people who get stuck in life threatening situations (particularly in nature) and live. The book seeks to understand what behaviors are common to survivors, and what they did differently than others. While not directly about statistics (and suffering from some quite literal survivor bias), it’s a good examination of how we calculate risk and process information at critical moments.

Since I’ve brought up gerrymandering before, I thought I’d point to the ongoing 538 series on the topic, which includes this article about how fixing gerrymandering might not fix anything. That included this graphic, which shows that if you break down partisan voting by county lines (which are presumably not redrawn as often), you still see a huge jump in polarized voting:

There was an interesting hubbub this week when California proposed a new law that would find restaurants $1000 if their waiters  offered people “unsolicited straws”. The goal of the bill was to cut down on straw use, which the sponsors said was 500 million straws per day. Reason magazine questioned that number, and discovered that it was based on some research a 9 year old did. To be fair to the 9 year old (now 16) he was pretty transparent and forthcoming about how he got it (more than some adult scientists), and he had put his work up on a website for others to use. What’s alarming is how many major news outlets took what was essentially an A+ science fair project as uncontested fact.  Given that there are about 350 million people in the US, it seems like a number that shows we all use 1-2 straws per day should have raised some eyebrows. (h/t Gringo)

This piece in Nature was a pretty interesting discussion of the replication crisis and what can be done about it. The authors point out that when we replicate a finding,  any biases or errors that are endemic to the whole design will remain. What they push for is “triangulation” or trying multiple approaches and seeing what they hone in on. Sounds reasonable to me.

Another topic I’ve talked about a bit in the past is the concept of food deserts, and how hard they are to measure. This article talks about about the inverse concept: food swamps. While food deserts measure how far you are from a grocery store, food swamps measure how many fast food options you have nearby. Apparently living in a food swamp is a much stronger predictor of obesity than living in a food dessert, especially if you don’t have a car.

The Assistant Village Idiot has had a few good posts up recently about how to lie with maps, and this Buzzfeed article actually has a few interesting factoids about how we mis-perceive geography as well. My favorite visual was this one, showing world population by latitude: 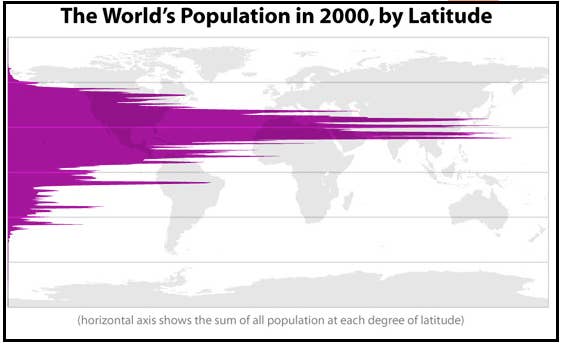 I liked this piece on the Doomsday Clock and the downsides of trying to put a number on the risk of nuclear war. Sometimes we just have to deal with a bit of uncertainty.

Speaking of uncertainty, I liked this piece from Megan McArdle about how to wrap your head around the “body cameras don’t actually change police behavior” study.  Her advice is pretty generalizable to every study we hear that counters our intuition.