It’s been a little while since I added anything to the GPD Lexicon, but I got inspired this week by a Washington Post article on American living situations. It covered a Gallup Poll that asked people an interesting question:

The results were then compared to where people actually live, to give the following graph: 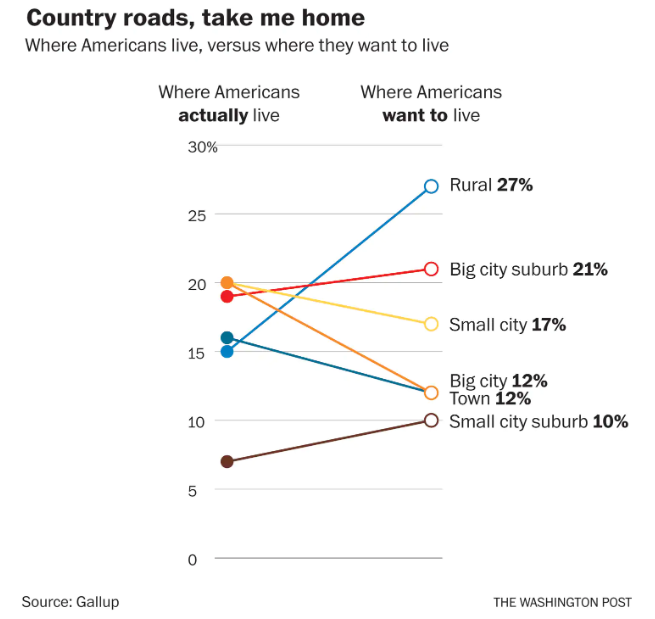 Now when I saw this I had a few thoughts:

The first was driven by my confusion over whether the town I grew up in would be considered a town or a “small city suburb”.

The second thought was driven by my deep suspicion that almost 30% of the US actually wanted to live in rural areas, whereas only half that number actually live in one. While I have no doubt that many people actually do want to live in rural areas, it seems like for at least some people that might be a bit of a proxy for something else. For example, one of the most common reason for moving away from rural areas is to find work elsewhere. Did saying you wanted to live in a rural area represent (for some people) a desire to not have to work or to be able to work less? A desire to not have economic factors influence where you live?

To test this theory, I decided to ask a few early to mid 20s folks at my office where they would live if they could live anywhere. All of them currently live in the city, but all gave different answers.  This matched the Gallup poll findings, where 29% of 18-29 year olds were living in cities, but only 17% said they wanted to. As they put it:

“One of the most interesting contrasts emerges in reference to big-city suburbs. The desire to live in such an area is much higher among 18- to 29-year-olds than the percentage of this age group who actually live there. (As reviewed above, 18- to 29-year-olds are considerably more likely to want to live in a big-city suburb than in a big city per se.)”

Given this, it seems like if I asked any of my young coworkers if they wanted to rent a room from me in my large city suburb home, they’d say yes. And yet I doubt they actually would. When they were answering,  almost none of them were talking about their life as it currently stands, but more what they hope their life could be. They wanted to get married, have kids, live somewhere smaller or in the suburbs. Their vision of living in the suburbs isn’t just the suburbs, it’s owning their own home, maybe having a partner, a good job, and/or kids. They don’t want a room in my house. They want their own house, and a life that meets some version of what they call success.

I think this is a version of what economists call a “revealed preference“, where you can tell what people really want by what they actually buy. In this version though, people are using their answers to one question to express other desires that are not part of the question. In other words this:

Proxy Preference: A preference or answer given on a survey that reflects a larger set of wants or needs not reflected in the question.

An example: Some time ago, I saw a person claiming that women should never plan to return to the workforce after having kids, because all women really wanted to work part time. To prove this, she had pointed to a survey question that asked women “if money were not a concern, what would your ideal work set up be?”. Unsurprisingly, many women said they’d want to work part time. I can’t find it now, but that question always seemed unfair to me. Of course lots of people would drop their hours if they had no money concerns! While many of us are lucky enough to like a lot of what we do, most of us are ultimately working for money.

A second example: I once had a pastor mention in a sermon that as a high schooler he and his classmates had been asked if they would rather be rich, famous, very beautiful or happy. According to his story, he was one of the only people who picked “happy”. When he asked his classmates why they’d picked the other things, they all replied that if they had those things they would be happy. It wasn’t that they didn’t want happiness, it was that they believed that wealth, fame and beauty actually led directly to happiness.

Again, I don’t think everyone who says they want to live in a rural area only means they want financial security or a slower pace of life, but I suspect they might. It would be interesting to narrow the question a bit to see what kind of answers you’d get. Phrasing it “if money were no object, where would you prefer to live today?” might reveal some interesting answers. Maybe ask a follow up question about “where would you want to live in 5 or 10 years?”, which might reveal how much of the answer had something to do with life goals.

In the meantime though, it’s good to remember that when a  large number of people say they’d prefer to do something other than what they are actually doing, thinking about the reasons for the discrepancy can be revealing.