I’ve mentioned before on this blog that my grandfather was a statistician who ran his own company producing probability chart paper. For those of you under the age of 40 (50? 60?) who weren’t raised around such things, this was basically graphing software before there were computers. Probability chart paper manipulated the axes of charts and allowed you to graph fancy distributions without actually have to calculate every value out by hand. Kind of like a slide rule, but for graphing. Not helping the under 40 crowd with that analogy I’m sure.

ANYWAY, what I don’t think I’ve mentioned here is that my grandfather also happened to be a stats blogger before computers existed. From 1974 to 1985 he produced a quarterly newsletter teaching people how to use statistics more effectively. I found out a few months ago that my father had actually saved a copy of all of these newsletters, and I’ve made it my goal this summer to read and digitize every issue. While a lot of the newsletters are teaching people how to do hand calculations (shudder), I may be pulling out a few snippets here and there and posting them. Today I was reading the issue from Late Winter (January and February) of 1975, and stumbled across this gem I thought people would appreciate: 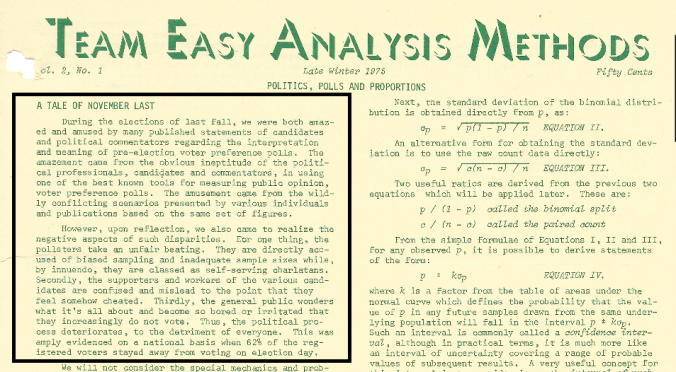 I still don’t know how he typed all those equations with a typewriter.

Gee, glad things have improved so much.

Fun possibly exaggerated family legend: my grandfather was a Democrat for most of his life, but he hated Ted Kennedy so much he maintained a Massachusetts address for almost a year after he moved to New Hampshire just so he could continue voting against him.