I was perusing Twitter this past weekend when I started to see some concerning headlines float by.

“Survey: 1 in 2 millennials would rather live in a socialist or communist country than capitalist one”

While I could see a survey of young people turning up with the socialism result, that last headline really concerned me. At first I thought it was just a case of “don’t just read the headline“, but all the articles seemed to confirm the initial statistic. AOL said “a lot of them see Joseph Stalin and Kim Jong Un as “heroes.”” Fox News hit on my discomfort when they said “The report also found that one in five Americans in their 20s consider former Soviet dictator Joseph Stalin a hero, despite his genocide of Ukrainians and Orthodox priests. Over a quarter of millennials polled also thought the same for Vladimir Lenin and Kim Jong Un.”

While I know polls frequently grab headlines by playing on people’s political ignorance, this seemed to go a step beyond that. I had trouble wrapping my head around the idea that anyone in the US could list Stalin, Lenin or Jong-Un as a hero, let alone 20-25%. I had to go see what question prompted such an odd set of results.

The overview of the poll results is here, and sure enough, the question that led to the results is worded a little differently than the article. Here’s the screenshot from the report, blue underlines/boxes are mine: 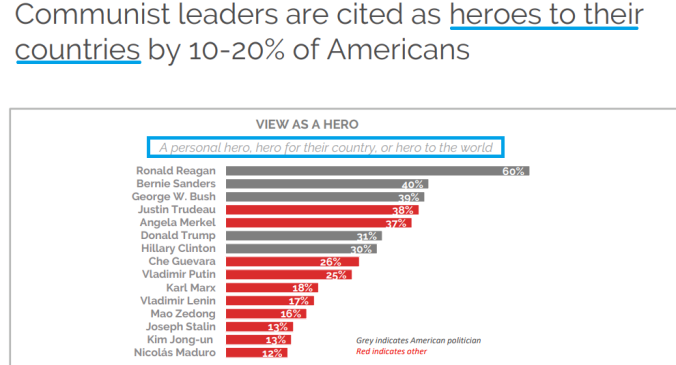 I think the “hero for their country” part is key. That asks people to assess not just their own feelings, but what they know about the feelings of a whole other country.

Interestingly, I decided to look up Kim Jong-un’s in-country approval rating, and some defectors put it as high as 50%.  According to one poll, 38% of Russians consider Josef Stalin to be the “most outstanding person” in world history. You could certainly debate if those polls had problems in wording, sample or other methodology, but the idea that a 25 year old in the US might see a headline like that and conclude that Russians really did like Stalin doesn’t seem outside the realm of possibility. Indeed, further down the report we find out that only 6% of millenials in the US state that they personally have a favorable view of Stalin. That’s lizard people territory folks.

In this case, it appears the polling company was actually pretty responsible about how they reported things, so it’s disappointing that further reports dropped the “in their country” piece. In my ongoing quest to name different biases and weird ways of skewing data, I’m now wondering what to name this one. What do you call it when someone asks a poll question in a way that encompasses a variety of scenarios, then the later reports shorten the question to make it sound like a different question was answered? I’m gonna work on this.

One thought on “Millenials and Communism”